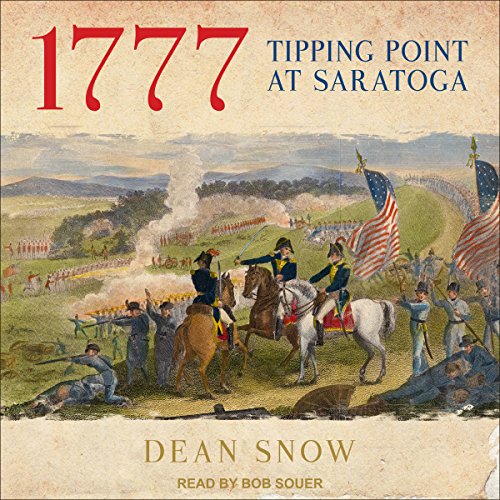 In the autumn of 1777, near Saratoga, New York, an inexperienced and improvised American army led by General Horatio Gates faced off against the highly trained British and German forces led by General John Burgoyne. The British strategy in confronting the Americans in upstate New York was to separate rebellious New England from the other colonies. Despite inferior organization and training, the Americans exploited access to fresh reinforcements of men and materiel and ultimately handed the British a stunning defeat.

Assimilating the archaeological remains from the battlefield along with the many letters, journals, and memoirs of the men and women in both camps, Dean Snow's 1777 provides a richly detailed narrative of the two battles fought at Saratoga over the course of 33 tense and bloody days. While the contrasting personalities of Gates and Burgoyne are well known, they are but two of the many actors who make up the larger drama of Saratoga. Snow highlights famous and obscure participants alike, from the brave but now notorious turncoat Benedict Arnold to Frederika von Riedesel, the wife of a British major general who later wrote an important eyewitness account of the battles.

What listeners say about 1777

I highly recommended for anyone that has a thirst for knowledge about history and the revolutionary war.

Despite growing up and living in Upstate NY and being a history buff, I had never studied the battle of Saratoga. This book was excellent in conveying the events and personalities of the battle. The use of primary sources was outstanding. The only criticism is Audible's failure to provide the relevant maps and illustrations as a PDF supplement.

Starts a bit slow, but continually builds and well worth the listen for any Revolutionary War fans.

......And so the Courage and Determination of various collections of militias from various parts of the old colonies showed the Bloody British and the rest of the world that the Rebels could fight and win out over one the world's foremost best trained armies in their own way and on their own terms.
The British learned that it was not a good idea to march even a highly skilled well disciplined professional army down roads surrounded by forests and angry American Rebels.
1777 is an hour by hour account of what many consider to be the turning point in the American Revolution.The indecision and excellent organizational skills of Gates,the hot headed Benedict Arnold,Gentlemen Johnny Burgoyne and MANY more characters and facts both familiar and unfamiliar are all there.
A major factor in the American success was that through the efforts of the governor of New York, the American forces were for a change Very Well Supplied.If you want historical detail and a lot of things you didn't know about Saratoga this is the book for you. If you don't,wait for a historical novel &quot;Shaara&quot;version to come along.
I would read both.

The author is an archeologist by trade and how he tells this story follows that way of thinking. This book is written in chronological order siting specific times and interweaving the back stories of the British, German and Americans, including the stories of the wives of the combatants. It is an intriguing examination of the tipping point in the American Revolution.

Excellent historical writing of the Battle of Saratoga. highly recommended reading on our nation's revolution.

Took about an hour to get used to the intense hour by hour account laid out in this book. Really came to love it as it enabled me to really grasp and envision what it would have been like to be there in Saratoga during that late Summer and Fall of 1777. Would definitely recommend if you are into Revolutionary War history.

Very happy with this book. The depth of detail and story telling was very enjoyable. Even though I knew the outcome it kept me glued to the book and I recommend it.

Well done! I found it to be a complete and enthralling account of the pivotal battle that shifted the tide toward American independence.