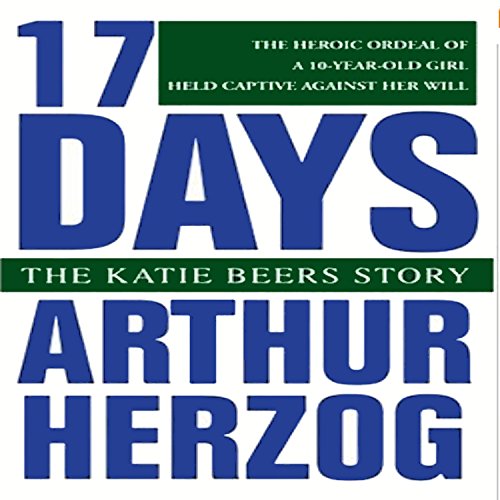 By: Arthur Herzog III
Narrated by: Alex Hyde-White
Try for $0.00

On December 28, 1992, two days before her tenth birthday, Katie Beers disappeared. She had left for an outing with a close family friend, John Esposito, and her whereabouts remained mysterious as the year drew to a close and her family grew frantic, fearing the worst. On January 13th, Katie was found alive in a secret, dungeon-like vault beneath Espositos Bay Shore, Long Island house. Families nationwide followed the story of Katies heartwrenching ordeal, as she bravely survived the isolation until her nearly miraculous rescue from a setting reminiscent of The Silence of The Lambs. Katie's harrowing story reveals a chilling side of human nature, even in the seemingly peaceful suburbs. And her fate as the smiling survivor of a troubled family raises disturbing questions about the plight of children across America: children like Katie, whose trust can be so easily betrayed.

What listeners say about 17 Days

A Little girls courage to survive the unthinkable

The story of one little girls kidnapping ordeal, and her courage to survive. This is every parents worst nightmare. A close family member who you should be able to trust around your children only to have them cause a chain of events that would change one little girls life forever; and a city that did not give up on their search to bring her home. This book is a must listen as it gives the perspective from the author of what happened on the outside.

I have listened to many books narrated by Alex Hyde-White. This book is only one of many he has done. But with all of them just like this one, he has done a fantastic job on giving each character from the book a unique voice to enable each of them to tell the story thru the narrators talents.

This book is a must listen that will keep you on pins and needles, pull at your heartstrings, and feel for Katie thru her heart wrenching ordeal.

What did you love best about 17 Days?

That Arthur Herzog, got into Katie Beers' head, feeling as she did, being under ground with only a TV,

What was one of the most memorable moments of 17 Days?

Meeting Katie Beers, who said she used Arthur's book to help her write hers. Seeing Katie Beers on CNN described as the poster child for Missing Children as she turned out so well.
Meeting most of her relatives, being at the trial, and meeting her foster father, who raised her so well, after she was rescued.

Have you listened to any of Alex Hyde-White’s other performances before? How does this one compare?

I think one would have to option both books, Arthur Herzog's and Katie Beer's to make a film.

What a great read!

This is a story about Katie Beers, a young girl who disappeared two days before her tenth birthday! This book tells us about her search and family history, along with the scary statistics from the FBI about kidnappings and pedophiles. Written more like a novel which is more interesting, rather than a non fiction, this book does a good job at information.

The author, Arthur Herzog III does a great job at writing this book in such a way to hold our interests. The plot is good, the suspense if fantastic! The narrator, Alex Hyde-White does a pretty good job delivering this book to us, although I did find several places in the narration where it repeated itself (like he started over again). Narration is a very difficult job and therefore I don't take any marks off for it. After all, we are all human and it wasn't too noticeable. This is still a 5 star read! Good job guys!

This is the worst editing job I've ever heard on Audible! Why would they ruin what's propably a good book without editing it? The narrator is so boring to listen to also. Don't waste a credit or money on this. Buy the book.

Too many missed outtakes

There are far too many outtakes left in and it makes the reader think that you don’t care about their experience. Not many facts and quite a lot of speculation.