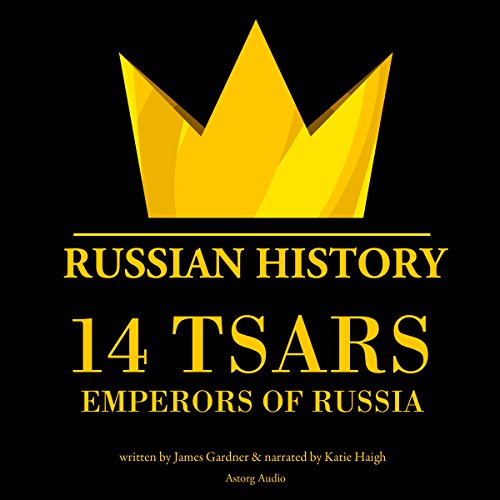 By: James Gardner
Narrated by: Katie Haigh
Try for $0.00

The Russian Empire was the third-largest empire in world history, stretching over three continents. It played a major role in 1812-1814 in defeating Napoleon's ambitions to control Europe and expanded to the west and south. At the beginning of the nineteenth century, the Russian Empire extended from the Arctic Ocean in the north to the Black Sea in the south, from the Baltic Sea on the west to the Pacific Ocean, and (until 1867) into Alaska in North America in the east. Its wide disparities bred dissidence and rebellions; along with its enormous size, this made it a challenge to govern for each one of its successive rulers.

Learn about the history of the Russian Empire through the careful portrait of its fourteen greatest emperors, which led it through troubled times until its collapse during the February Revolution.

What listeners say about 14 Tsars, Emperors of Russia