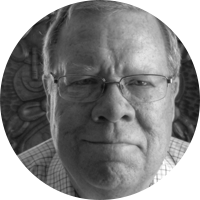 His iconic voice has introduced every title in our store. When you hear
"This is Audible," you're hearing Rick Lewis, one of Audible's first employees.

"This is Audible."
With only a handful of staff at the time, everyone pitched in where they could to make Audible a reality—as Lewis did when recording these three famous words.
A Tribute to Rick Lewis 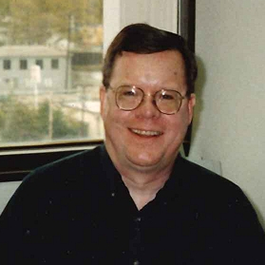 "Even if you didn’t know Rick, you know his voice."


"Rick Lewis became one of Audible’s first employees when he joined us in 1996 after years as a public radio innovator. He had previously been the executive producer of NPR’s All Things Considered and had hired the original voices for Morning Edition. In those start-up days, we all did everything. Even I would be ushered into the studio to record intros and messaging, but that stopped when Rick laid down “This is Audible” and “Audible hopes you’ve enjoyed this program.” Rick retired in 2012 to live in the Andes, 10 miles from the equator, and as his blog indicates, he continued to live his days fully with his intellectual curiosity and love of cultural expression front and center. I will miss his ceaseless intellect, his curiosity, his sharp sense of humor and his friendship."

Rick Lewis was among Audible’s very first employees, joining the company in 1996 following a storied career in public radio. He is also the voice behind the two iconic phrases “This is Audible” and “Audible hopes you have enjoyed this program.” Like everyone in those early Audible days, Lewis did a little of everything, from content acquisition to user testing. One day, he sat down to record the 10 words that would ensure his anonymous fame. These words, in his voice, have become so beloved to countless listeners, signaling both the start of a new journey and the satisfaction of finishing a great story. Many have expressed their appreciation on social media with comments like “Does anyone else avoid turning off a book a few seconds early, specifically to hear this?” and “’This is Audible’ is the best phrase to hear, and ’Audible hopes you have enjoyed this program’ is one of the saddest.” Our hearts broke when he unexpectedly passed away in 2019.

Before his tenure at Audible, Lewis worked at NPR as an executive producer of All Things Considered and helped to develop Morning Edition. He managed stations and networks in Minnesota, California, and Iowa, was a fundraising executive in Florida, and led business development efforts in East Asia for an international satellite broadcasting company. He retired in 2012, most recently living in a 17th century hacienda in the Andes of Ecuador, about 10 miles from the equator.

Lewis had the heart of an adventurer and once described himself as “a sometime world traveler, cook, camper, photographer, and compulsive essayist.” An Iowa native, he spent stints living in Southern California, New Jersey, Minnesota, Washington DC, Florida, Nicaragua, and Ecuador.

You won’t be charged until after 30 days. Don’t like an audiobook? Swap it for free. Cancel anytime, no questions asked.


Enjoy your titles on iOS (Apple iPhone, Apple Watch, iPad), Android, Sonos, Kindle and Alexa-enabled devices. And when you switch a device, pick up right where you left off.