One of the highest grossing film franchises of all time, Star Wars isn’t your average saga. Over the years, it has amassed millions of fans with a growing range of content that includes films, television series (both animated and live action), novels, comic books, video games, toys, and more. It’s no exaggeration to say that Star Wars is one of the biggest cultural juggernauts we’ve ever seen, a series that continues to expand and appeal to generation after generation. But it all started a long time ago, in a galaxy far, far away—that is, 1977 in the great state of California.

When Star Wars creator George Lucas first dreamt up what would become the most epic space opera of all time, he pulled inspiration from the heroics of sci-fi serials like Flash Gordon, sword and sorcery fantasy, spaghetti westerns, and Akira Kurosawa’s samurai films, melding these eclectic muses with a vision all his own. With only two feature films—THX 1138 and American Graffiti—on his resume, the young filmmaker set out to make a different kind of sci-fi film, one that was light, imaginative, and full of heart, capable of appealing to the youngest filmgoers and adults alike. Alongside an unforgettable cast that ranged from newbies like Carrie Fisher and Mark Hamill to legendary greats like Alec Guinness and Peter Cushing, Lucas’s Star Wars (retroactively renamed Episode IV: A New Hope) offered audiences escapism, adventure, and hope in a story that would become synonymous with space fiction.

But why exactly do fans love Star Wars so much? And what was it like to be a part of a franchise so massive it necessitated its own galaxy? In these nonfiction Star Wars listens—which feature Star Wars cast memoirs and biographies, works of cultural criticism, and insightful podcasts alike—you’ll hear stories from the set and gain a new perspective on the saga’s impact. 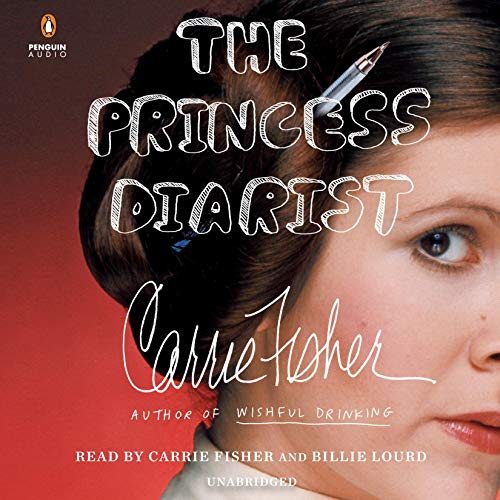 The Princess Diarist
By Carrie Fisher
Narrated by Carrie Fisher, Billie Lourd
00:00
05:00
Update RequiredTo play the media you will need to either update your browser to a recent version or update your Flash plugin.
Carrie Fisher was one of Hollywood’s most excellent memoirists, with her Wishful Drinking and Shockaholic both highlighting her comedic chops and earnest rejection of the veneer of celebrity. The last memoir published before her death in 2016, The Princess Diarist is somewhat narrower in scope but just as openhearted. Fisher became an icon of the big screen and a heroine for an entire generation when she was cast as Princess Leia Organa in George Lucas’s Star Wars saga. In this memoir, narrated by the author and her daughter, Billie Lourd, Fisher reflects on journals she found while working on the set of the first film in 1977. Reminiscing on her relationship with co-star Harrison Ford, behind-the-scenes antics and cherished memories alike, and the follies that followed her stint as the galaxy’s most famous royal, Fisher leaves us with the very thoughtful musings and quick wit that will forever cement her legacy. 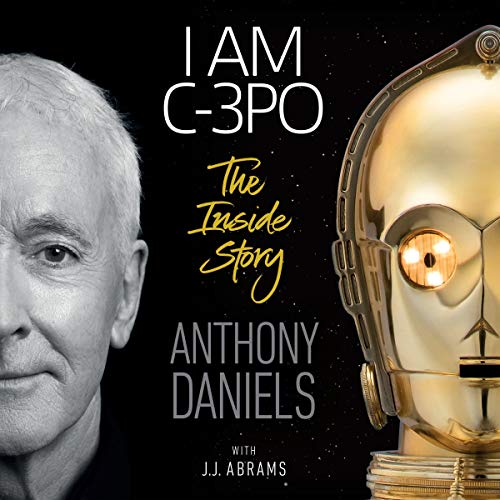 I Am C-3PO
By Anthony Daniels, J.J. Abrams
Narrated by Anthony Daniels
00:00
05:00
Update RequiredTo play the media you will need to either update your browser to a recent version or update your Flash plugin.
What would Star Wars be without the persnickety, neurotic protocol droid C-3PO? Fluent in more than six million forms of communication (at least one of which seems to be consistently aggravating Han Solo), Threepio is one of the saga’s mainstays, built by Anakin Skywalker when he was only a child. But what truly made the golden guide of human-cyborg relations instantly memorable is the performance of Anthony Daniels, who made the polite and panic-stricken droid one of the series’ most loveable constants. In I Am C-3PO, Daniels recounts his experience working on all nine films of the Skywalker saga, from 1977’s A New Hope to 2019’s The Rise of Skywalker. In his familiar and warm voice, he shares memories from his time spent in and out of the metallic costume (a costume he could not even sit down in while wearing), taking a nostalgic glance back at the making of Star Wars, from his co-stars to the press tours.

A Long Time Ago, in a Cutting Room Far, Far Away 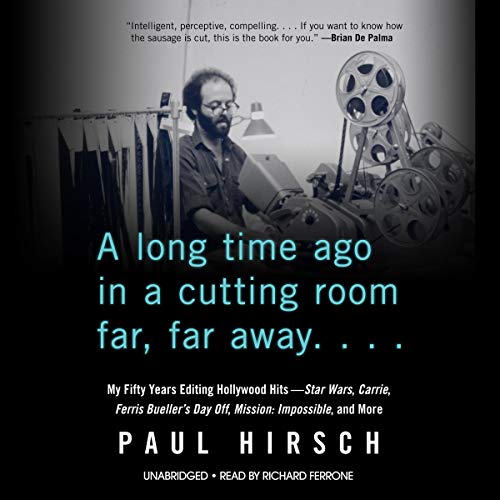 A Long Time Ago, in a Cutting Room Far, Far Away
By Paul Hirsch
Narrated by Richard Ferrone
00:00
05:00
Update RequiredTo play the media you will need to either update your browser to a recent version or update your Flash plugin.
Behind the scenes of any work of movie magic is a host of creatives, all collaborating to craft the best on-screen experience possible. And film editing is among the most unsung arts of the process. In A Long Time Ago, in a Cutting Room Far, Far Away, writer Paul Hirsch—a celebrated film editor who worked on both A New Hope and The Empire Strikes Back—sheds a bit of light on the role of film editors and, more specifically, the work he did on films including the first two blockbusters in the original Star Wars trilogy, teen comedy classic Ferris Bueller’s Day Off, and horror favorite Carrie. Whether you’re fascinated by the art of editing or just looking for some fresh insights into how that famed galaxy far, far away came to be, Hirsch’s memoir definitely delivers. 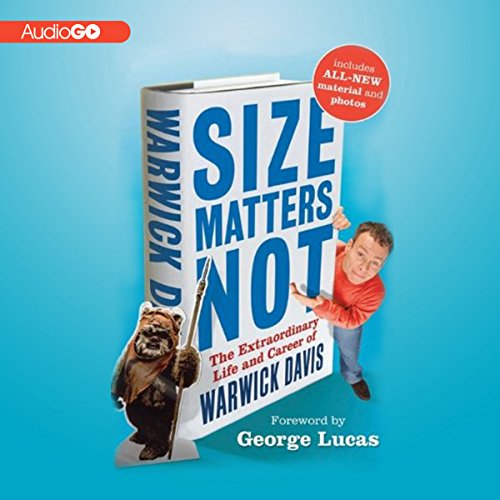 Size Matters Not
By Warwick Davis
Narrated by Gideon Emery
00:00
05:00
Update RequiredTo play the media you will need to either update your browser to a recent version or update your Flash plugin.
Warwick Davis is sci-fi and fantasy royalty. He's portrayed both Professor Filius Flitwick and goblin banker Griphook in the Harry Potter film series, the title character in the 1988 adventure classic Willow, and, of course, the fuzzy Ewok warrior Wicket in Episode VI: Return of the Jedi. But that's not Warwick's only tie to the Star Wars universe: he's appeared in six other installments, from The Phantom Menace to Solo to The Rise of Skywalker. His endlessly endearing memoir Size Matters Not houses stories from his time on the saga's set alongside anecdotes hilarious and heartwarming alike—from his work on the cult favorite Leprechaun series to his struggles with spondyloepiphyseal dysplasia congenita. The same enthusiasm and magnetism that make Davis an absolute joy to watch on screen shines through in every recollection. 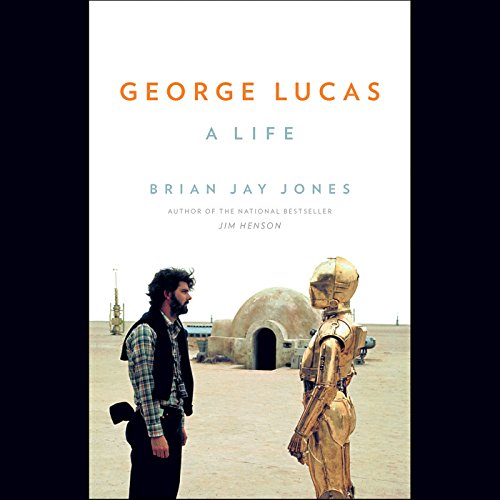 George Lucas
By Brian Jay Jones
Narrated by Jay Snyder
00:00
05:00
Update RequiredTo play the media you will need to either update your browser to a recent version or update your Flash plugin.
And then there’s the man who started it all. In George Lucas: A Life, writer Brian Jay Jones offers a thorough and thoughtful biography of the Star Wars creator. From Lucas’s childhood as a comics and sci-fi-obsessed kid in Modesto, California, to his rise to fame as the mind behind some of the biggest blockbusters ever made (we’re not just talking Star Wars—Lucas also created the Indiana Jones series!), Jones examines his subject with a balance of awe and honesty, emphasizing the magnitude of Lucas’s influence. As much a deeply fascinating bio of George Lucas as a history of the conception, making, and promotion of the Skywalker saga, this is a must-listen for every fan, made all the more compelling by narrator Jay Snyder’s delivery, which is akin to that of an expert documentarian.

Why We Love Star Wars 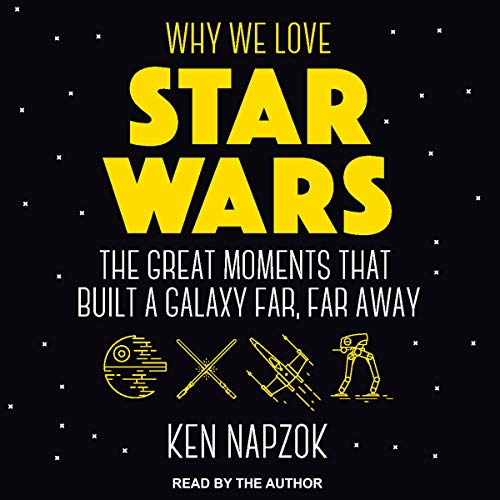 Why We Love Star Wars
By Ken Napzok, Joseph Scrimshaw - foreword
Narrated by Ken Napzok
00:00
05:00
Update RequiredTo play the media you will need to either update your browser to a recent version or update your Flash plugin.
If a franchise is only as successful as its fans are loyal, dedicated, and invested, then Star Wars is totally unparalleled. Whether it’s perfecting a screen accurate cosplay, camping outside the theater for the latest release, or showing off your Star Wars scholastic skills during a round of trivia, Star Wars fans are among the most earnest and passionate aficionados out there. And writer Ken Napzok, an expert appreciator of Star Wars, knows that fervor quite well. In the author-narrated Why We Love Star Wars, Napzok captures the unique magic of Star Wars, putting into words the sensations evoked by each opening crawl or triumphant John Williams-scored reprise. A love letter to the Star Wars franchise and the fans who have ensured its longevity, this listen is an absolute delight.

How Star Wars Conquered the Universe 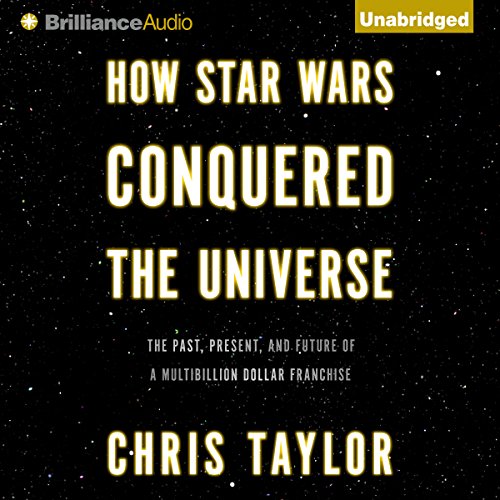 How Star Wars Conquered the Universe
By Chris Taylor
Narrated by Nick Podehl
00:00
05:00
Update RequiredTo play the media you will need to either update your browser to a recent version or update your Flash plugin.
In How Star Wars Conquered the Universe, Chris Taylor dives into the history that took Star Wars from an imaginative new idea to a cinematic mainstay. In this in-depth guide to the production of the saga and the legacy of merchandising, fandom, and cultural significance that follow, Taylor offers insight on the longevity of the beloved space opera and all those who played a part in its creation. Whether it's diving into the more controversial elements of the series’ history (like digital edits made to the re-releases of the original trilogy) or zeroing in on the most dedicated fans among us (like, say, the 501st Legion, a volunteer cosplay organization that’s crafted insanely detailed replicas of Imperial costumes and armor), this listen offers something for everyone from newcomers to certified Jedi Masters. 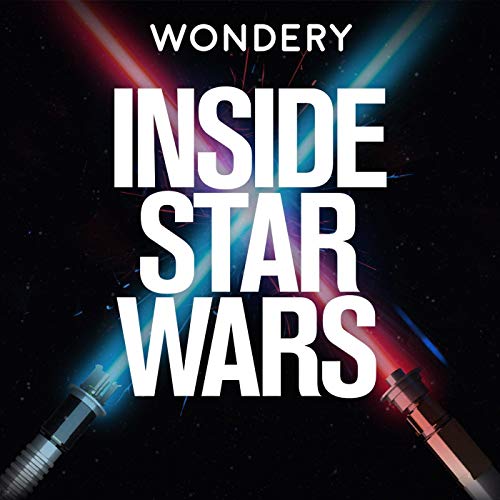 Inside Star Wars
By Mark Ramsey
Narrated by Mark Ramsey
00:00
05:00
Update RequiredTo play the media you will need to either update your browser to a recent version or update your Flash plugin.
Wondery’s Inside Star Wars podcast is an audio treasure trove for fans who want to know all the ins-and-outs of the making of 1977’s original Star Wars. Creator and host Mark Ramsey brings a sense of wit, humor, and levity to the often difficulty-plagued production, unearthing struggles ranging from malfunctioning droids to one less-than-enthusiastic Oscar winner cast in one of the film’s chief roles. This podcast is an absolute joy to listen to, with sound effects, music, and production that make you feel as if you’re actually on set alongside the likes of George Lucas and Harrison Ford. It’s a must for every Star Wars fan, or anyone interested in how a film goes from initial idea to international sensation. 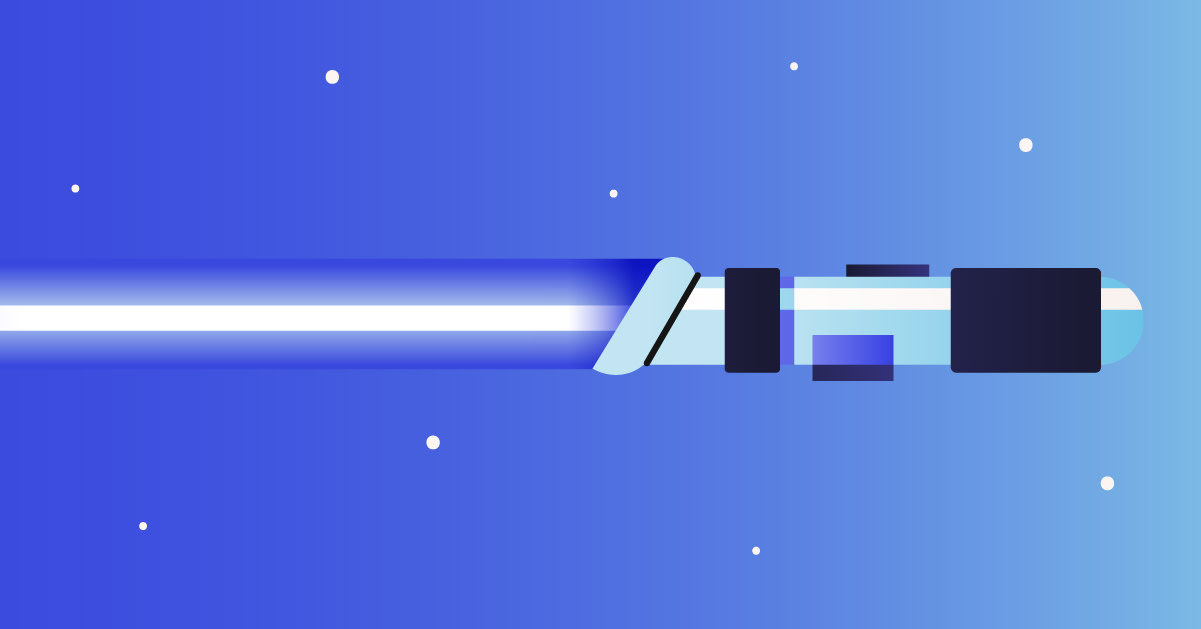 Like My Father Before Me: The Skywalker Family Tree 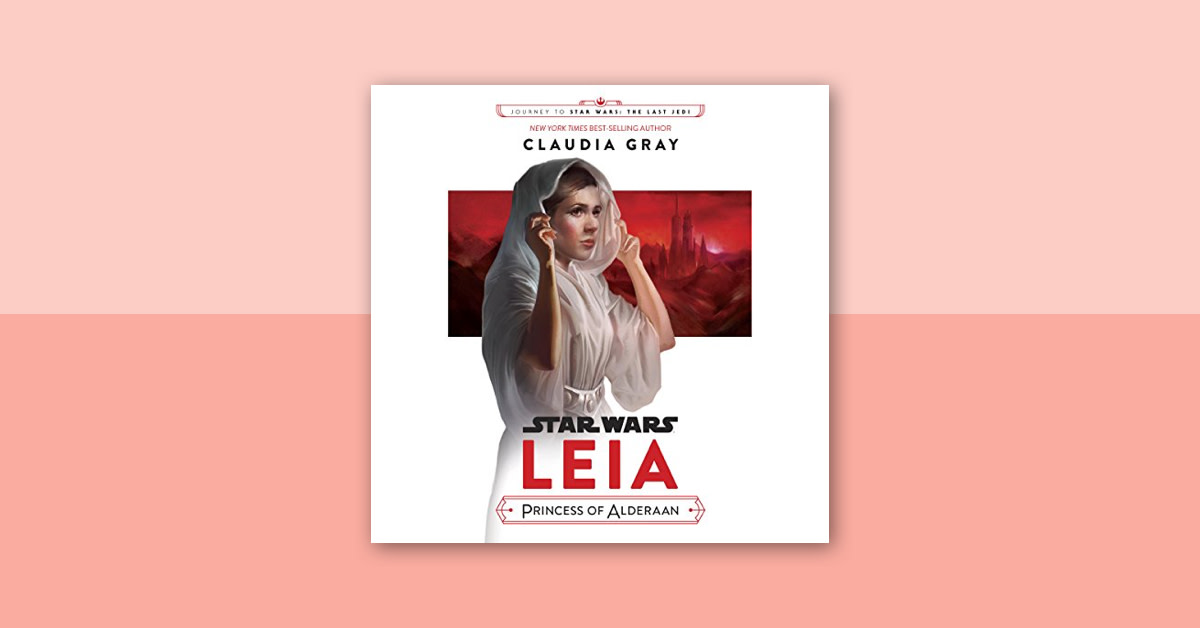 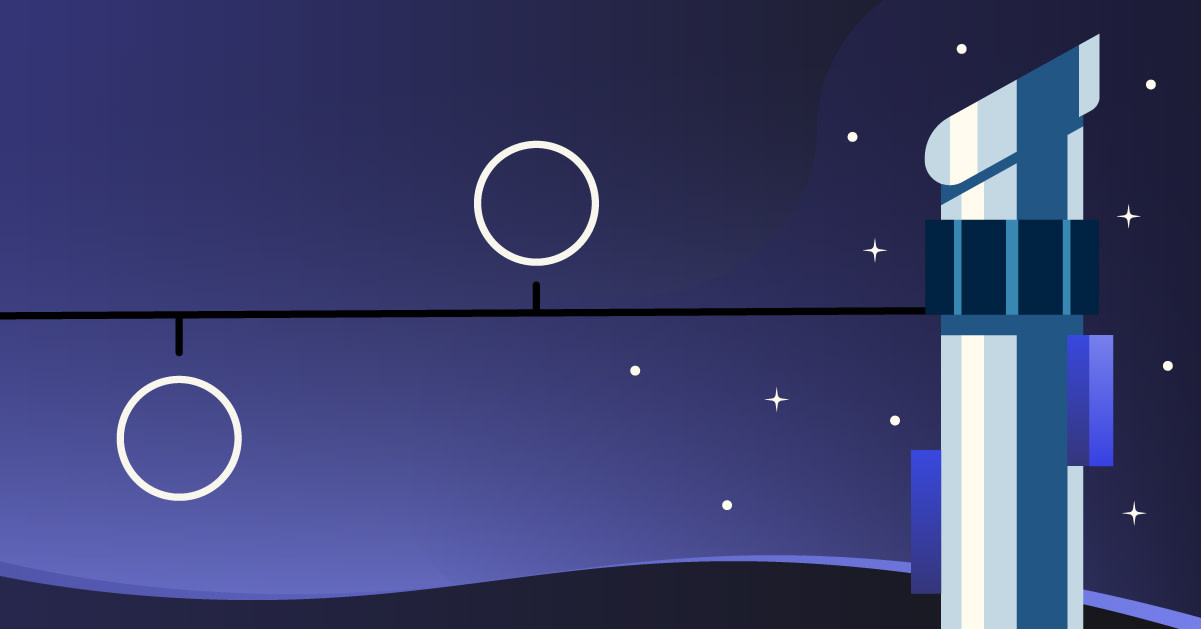 The Definitive Guide to the Canonical Star Wars Timeline